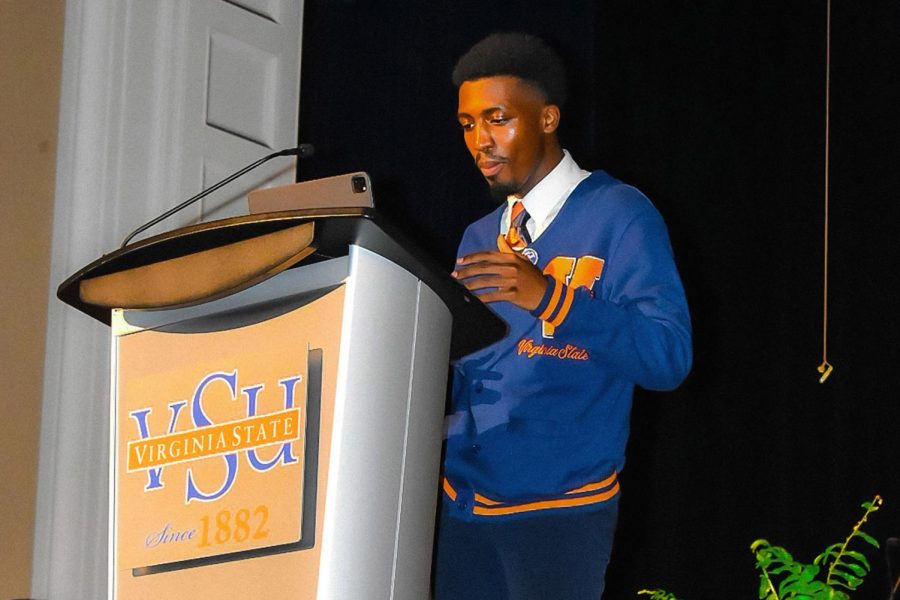 On March 17, 2022, Founder’s Day guest speaker Dr. Khaalida Forbes spoke to a crowd of students and faculty about the power of faith. Her address took place in the Anderson Turner Auditorium on the campus of Virginia State University.

Dr. Forbes graduated as a member of the Class of 1998 and is currently Founder and Chief Executive Officer of Khaalida Forbes Enterprises and Pastor of Truth City.

Forbes spoke about her life and began to preach about what it means to have faith. She also mentioned how faith carries everyone into becoming successful in what they do.

“Just because a door won’t open immediately doesn’t mean it won’t open eventually. Faith is getting you through everything,” Dr. Forbes said.

Dr. Forbes became a speaker and when she was going through the process of faith, she realized that many people doubted her journey. She graduated from VSU which was her foundation of becoming the successful speaker she is today and she thanks VSU.

“Just because you can’t see my foundation doesn’t mean I don’t have one,” Dr. Forbes said.

Speaking about her foundation being rooted from the support of Virginia State University, it has led to her speaking more about the topic of substance.

“Everything created was invisible first but created in somebody’s mind. Talk about the word substance,” Dr. Forbes said.

With faith, a strong foundation, and substance as a result, Forbes encourages people to keep going and be successful. She is looking forward to continuing her journey as a speaker and helping others grow.

In addition to the address from Dr. Forbes, the VSU Choir sang, greetings were brought by Mister 1882 and Miss Virginia State, and Vice Rector Glenn Sessoms, and Alumni Association President Michael Rainey.

SGA Vice-President Mekhi McKinney presented a historical reflection through a dramatic reading of the speech Delegate Alfred Harris gave to the Virginia House of Delegates in 1882, during the discussion of the formation of the Virginia Normal and Collegiate Institute.

President Dr. Makola M. Abdullah concluded the ceremony by asking the audience, “So when is the founding of Virginia State University? It’s a very interesting question… because our school didn’t open right away. The March 6, 1882 date is the date when we were chartered by the Virginia General Assembly but the doors were not open until October 1, 1883.”

President Abdullah continued by asking, following Dr. Forbes speech, if VSU was founded when it was created in the mind.

He concluded, “We are always creating the foundation for the next generation… To everyone who believes in the Virginia State University and the promise, you create this institution daily so that we can continue to move forward.”

The Annual VSU Founder’s Day Convocation was live-streamed on Vimeo and has been made available on YouTube.