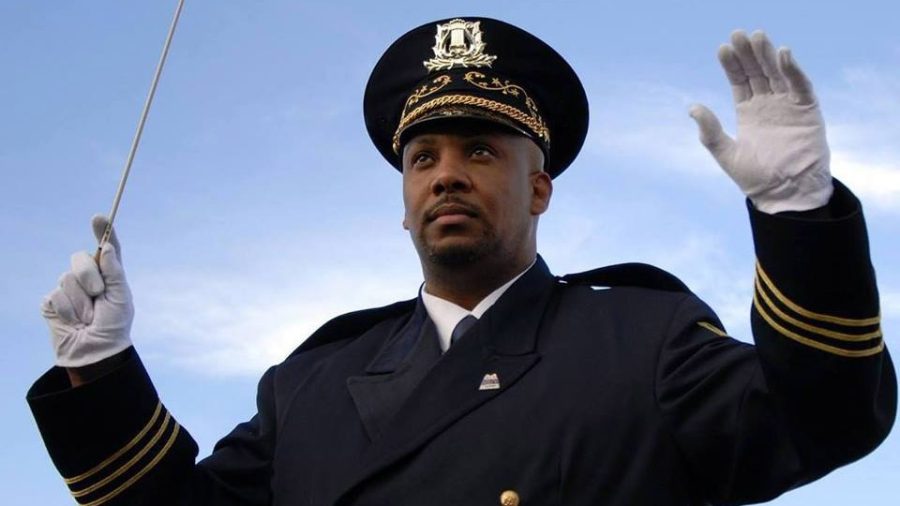 Thump! Went the sound of a tuba in the distance that once caught the attention of a small child.

Little did he know that one sound would take him on a journey of a lifetime he would never imagine.

“No one in my immediate family played an instrument. The first band I ever heard was the Virginia State Band. It was the tuba that caught my attention. When I got to middle school and was able to pick up an instrument, I did fairly well and was put on the tuba,” Whitehead said.

After several hours and years of practicing and performing at Lunenburg Middle School, Whitehead soon moved on to continue his musical journey with his tuba at Central Senior High School.

“Central Senior High School provided me with amazing experiences with music. Our football team was popular, so the marching band always traveled, and I was the drum major and the best tuba player on campus. The popularity that came with the tuba and the drum major position, allotted me the space to be able to learn how music and performing impacts others,” Whitehead said.

Central Senior High School, along with his dedication to music, allowed Whitehead to make the decision to pursue a career in music. He continued his music education at VSU during the years 1991-1996.

“I always loved Virginia State University, my parents went here. More than that, I loved being around the Trojan Explosion Marching Band. Traveling and performing with the band gave me experiences that I will never forget. I wish I could do it all over again,” Whitehead said.

With this passion and love for the Virginia State University Band, Whitehead decided to stay full-time in 2018 as a music educator. At VSU, Whitehead instills in his students Family, Cooperation, Discipline, Perseverance, and Dedication.

“Those characteristics make not only a great band but outstanding individuals,” Whitehead said. “Band is a unit of family. You will have new beginnings with the people you encounter in the Virginia State Band. These people will become your best friends for 20 plus years, colleagues, even husbands and wives. With all that being said, no matter the amount of time you attend VSU, you’ll never forget it started in the Virginia State Band,” Whitehead said.

One might catch Whitehead at Lindsay Montague, his old band room, recapping all his wonderful memories, or in Davis Hall where he instills the values of family and everlasting love to the newer generations of students. When being taught and directed under Whitehead one will always hear him saying, “This is the Best Band in the CIAA.”

More importantly Whitehead reassures his students that the Virginia State University Band, for those that come through, will always feel like it’s home.