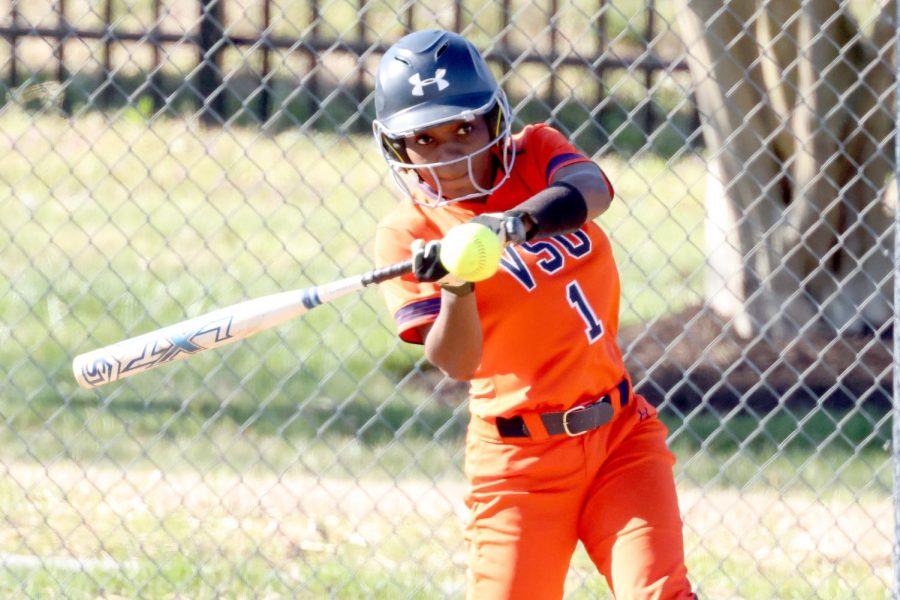 Freshmen Alaijah Pratt connects with a high fastball. Pratt has not only commanded the batter’s box, but also the pitcher’s mound going 7-3 this season. She recently threw a two-hit shutout against Bowie State and a one-hit shutout against Lincoln. Photo by Virginia Statesman staff.

Trojans conclude their season with two doubleheaders against Union

With just four games left in the regular season, the Virginia State University softball team is just three wins away from 20 wins, a major accomplishment in the first year back to a normal regular season.

After being down 2-0 to Bowie State, off of a Brittney Brewer home run, the Trojans mounted a 5th inning rally to claw their way back into the game, and eventually take the lead.

Three doubles in the 5th proved too much for the Bulldogs, and Desmond Owens tallied the win on the mound bringing her record to 6-5 on the season.

In the second game of the doubleheader against the Bulldogs, the Trojans kept their opponent off of the scoreboard completely, 8-0.

Owens broke open the 0-0 score in the second with a homer to left center, giving the Trojans a 1-0 lead. From that point on the Trojans didn’t look back.

Scoring in the 3rd, 4th, and 5th innings with hits from Macy Beville, Samantha Cunningham, and Alani Horton, the Trojans took the second game of the doubleheader with the mercy rule in the 5th.

Next up for the Trojans are two doubleheaders to finish the season. They play Virginia Union at home on Thursday, April 21st at 4 PM and 6 PM. They then travel to Richmond to face the Panthers in a rematch on Saturday, April 23rd at 1 PM and 3 PM to conclude their regular season.