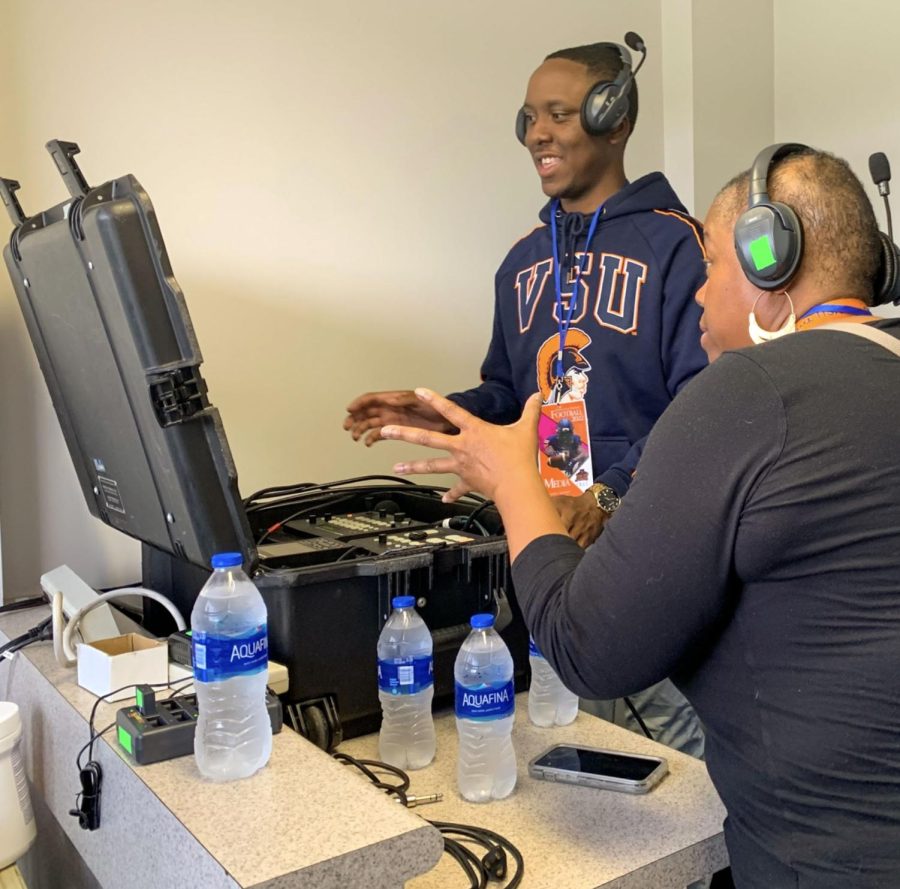 Jaylen Cofield learns how to operate a control board in the press box at Rogers Stadium. Contributed photo by Professor Antoine Williams.

MCOM Productions is a new organization for the Mass Communications Department as students and faculty members come together. With their weekly media boot camps held at the Multi-Purpose Center (MPC) on Tuesdays from 4 – 8 p.m., students are instructed and trained by Dr. Jerry Crawford and Mass Comm. professors on various skills prominent in mass media.

“The boot camp is for television, broadcast news, audio, radio, and public relations,” Crawford said. “We’re going back to the basics to teach students what strategically goes into these areas so we can take on fun projects and they’ll leave with something.”

The organization has ideas and plans to take on projects presented and organized by both students and faculty such as a newscast, television show, and social media site. However, they have already started taking action with their first live broadcasting of a football pregame show and game through Greater Sports Trojan Network (GSTN). A sports broadcast show created by the students and faculty of MCOM Productions.

“It’s an HONOR and PRIVILEGE to announce that I am in the VSU History books!” Jaylen Cofield, senior mass communications major and member of MCOM Productions and GSTN stated on his Instagram post. “I have named our OFFICIAL sports broadcast show GSTN (Greater Sports Trojan Network). I will be directing/producing the remaining football games with hopes of coming back after I graduate, This is only the BEGINNING.”

Other members are also excited about what’s to come in addition to what they have already learned. The opportunities and experiences that the MCOM Productions and the media book camps provide are resources the students have been looking for.

“I want to get into directing, acting, writing, and working with cameras,” Javay Simms, a sophomore mass communications major, entrepreneurship minor, and member of MCOM Productions and GSTN said. “Networking with professors and the boot camp is helping me learn how to be on the air, operate the camera, and reach my goals of creating a podcast, a movie on campus, and a writer’s organization.”

MCOM Productions is still in its early stages; however, with the eagerness, dedication, and passion the students and faculty have to learn and create, they see themselves moving in the right direction.

“It’s important for me to have students know opportunities are there,” Crawford said. “But it’s going to take people who are dedicated and want to do things for us to make it happen. I believe we can get there.”